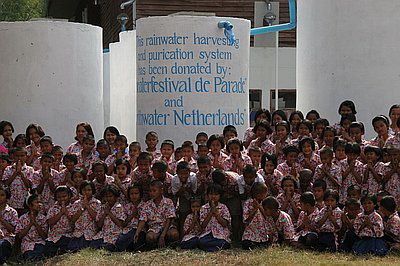 Together with HOAT and de Parade, rainwater harvesting systems have been installed at schools in Thailand. More than 1000 children will profit from this clean drinking water. After installing these systems and educating about the importance of using clean water, the number of children getting sick has been lower.

Thai school roofs have a very large surface which makes them perfect for rainwater harvesting. Rainwater harvesting has been common practice in Thailand for as long people can remember and is a very familiar way of collecting drinking water. However, the quality of the water is very bad by the time people start drinking it. The rainwater collected at the schools is stored in large concrete tanks, which aren't sealed well.  Small animals, like mosquito larvae's, cockroaches and lizards are able to get into the tanks. Together with the dirt from the gutters and the droppings of birds and cats that flush down from the roof, it makes the so called “drinking water” a very dangerous mixture. The water contains a lot of pathogen bacteria’s such as ecoli and coliform that cause diseases.

The system we place cleans the water and kills pathogenic bacteria. 20% of the system is imported from The Netherlands and has been tested extensively. 80 % is produced locally. The filter system is called a “rain purification center” and was developed by a Dutch company named “Aquaest Europe” which is specialized in rainwater harvesting systems. Once the water has passed the filters it is clean and safe to drink. The water is collected in a clean water buffer tank which also contains a floater with silver-coated balls. An attractive drinking place is situated close to the clean water tanks where the children can tap their cup of safe water.

Read more about this project.