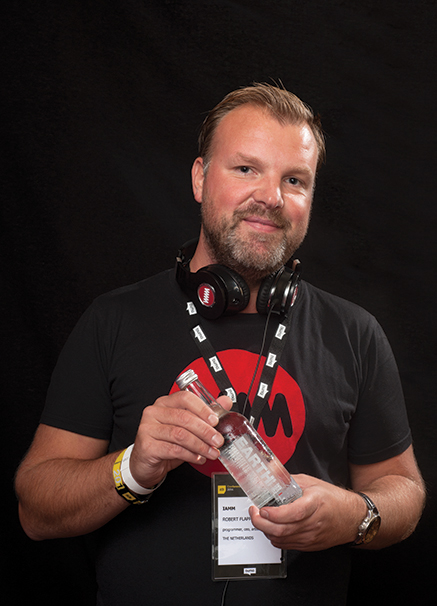 Dutchman Robert Feelgood was born and raised in the cultural heart of the country and one of the key cities in Europe, Amsterdam. A life immersed in music, Robert has provided unforgettable soundtracks to many thousands of event–goers since his first DJ set back in 1996. Indeed, Feelgood by name as well as nature, as Robert always strives to create a positive atmosphere everywhere he is booked.

As an artist he genuinely enjoys the music he brings as much as the crowd itself. His performances ensure a dance floor filled with both women and men getting down, with the vibe just right. Robert takes care to ensure an eclectic mix of several styles with elements always including an uplifting vibe, a distinct grooviness and an unmistakable funkiness as main ingredients. Years of experience and high levels of enthusiasm to this very day are the right ingredients to guarantee the right DJ for a wide range of events.

A constant stream of high-quality events within the nightlife scene and also in the corporate world sees Robert’s reputation as a performer go from strength to strength. As a quick background, Robert has held down key residencies at reputable Dutch clubs such as Hotel Arena, Club Rex, Hardersplaza, Escape Venue, City Hall, Las Palmas, Now & Wow, Sinners, the Mansion, Sinners, Club NL, de Waakzaamheid, Wasteland, the Zebra. In addition, he has guested at the likes of Jimmy Woo, Monza, Club Vie, Free Your Mind Festival, Rockit Open Air, Lowlands, Dance Valley, Panama, IT, Marcanti, Supperclub, Asta and many other venues. He has also been booked to fly to international gigs in Croatia, Curacao, Iceland, Spain, France, Hong Kong, Greece and Shanghai for special performances.

As a radio DJ, Robert provided his house sounds alongside presenter Jeroen van Inkel on the number 1 radio station of Holland, Radio 538, for three years. He also held down a weekly show on ID&T radio ‘ONESTARGROOVES’ with friend and colleague Erick E.

As a promoter, Robert is founder and owner of the SOUND OF LOVE brand in Holland. The movement is based on his club nights at SOL Amsterdam, and he regularly takes the brand throughout Holland and abroad. With club nights in Hotel Arena, Panama, de Rechter and Winkel van Sinkel, the 'FEELGOOD HOUSE SOUND' is not to be missed. Essential highlights were his performances on Rockit Open Air, Gaypride, Free Your Mind festival in Arnhem, Island Samba in Texel in the summer sunshine and of course the unforgettable SOUND OF LOVE show on the beach in Noordwijk with 12,000 insane party people!

Sound Of Love has also resulted studio success, with hot remixes for Jeroenski with a track entitled ‘This Feeling’ and Bastian Creon’s ‘Because Of You’, which were produced with Firebeatz.

Robert’s versatility is shown by his multimusical abilities, which see him perform with a variety of live musicians. His eclectic musical choice is often based on his passion for disco and dance classics. He takes this to a higher level by using these infleunces in new Housetracks. His collaboration with Let’s Play Music Holland has resulted in tracks on labels like Fogbank, Ammo and Samir maslo’s ‘In my house’.

Robert Feelgood; a effervescent, dedicated and multi-functional man with a warm personality, but most importantly a crowd-pleaser from Amsterdam who always provides a packed dance floor with his eclectic mix of funky house grooves. The essence of clubbing can be found in personified in this truly talented and diverse performer.